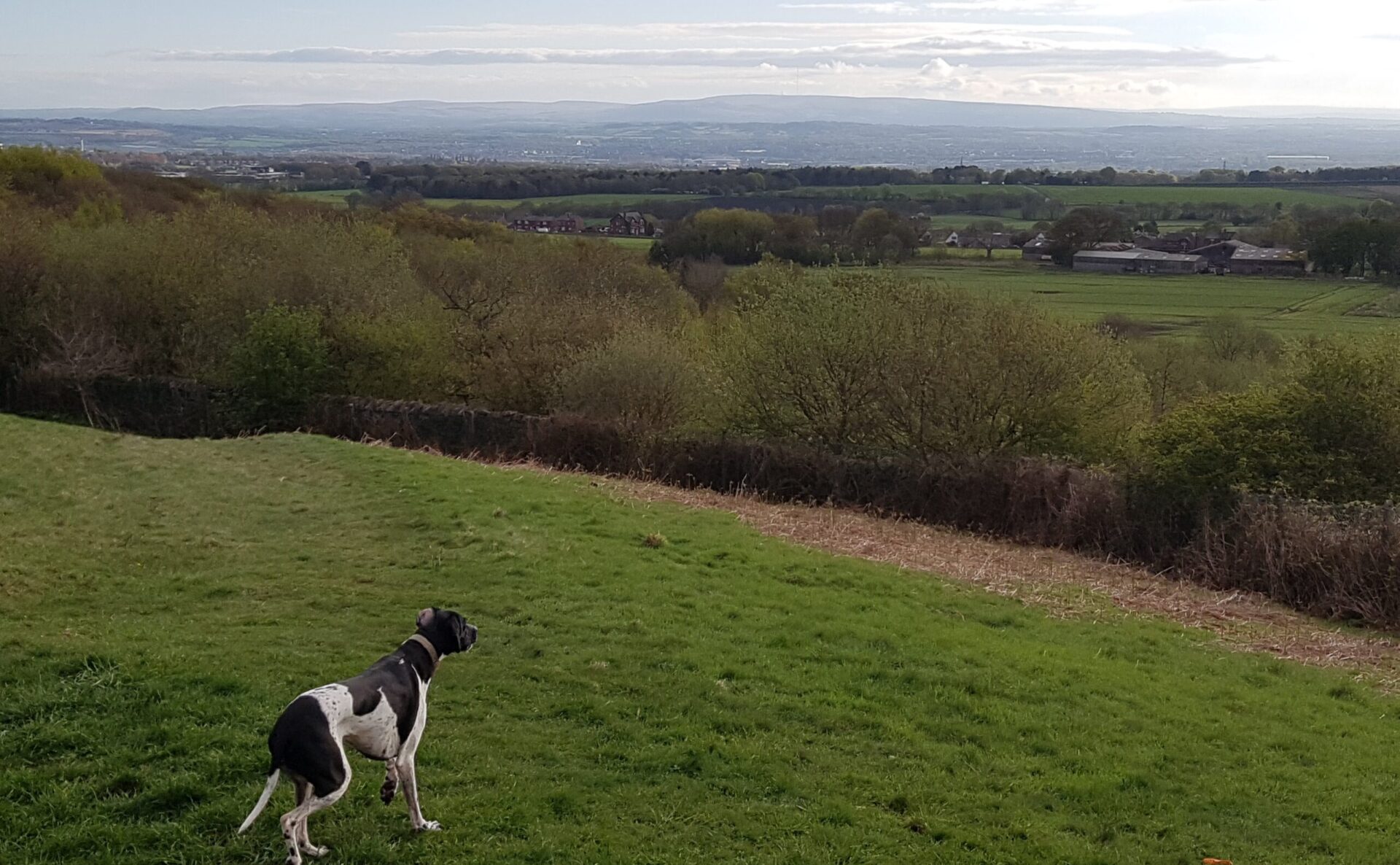 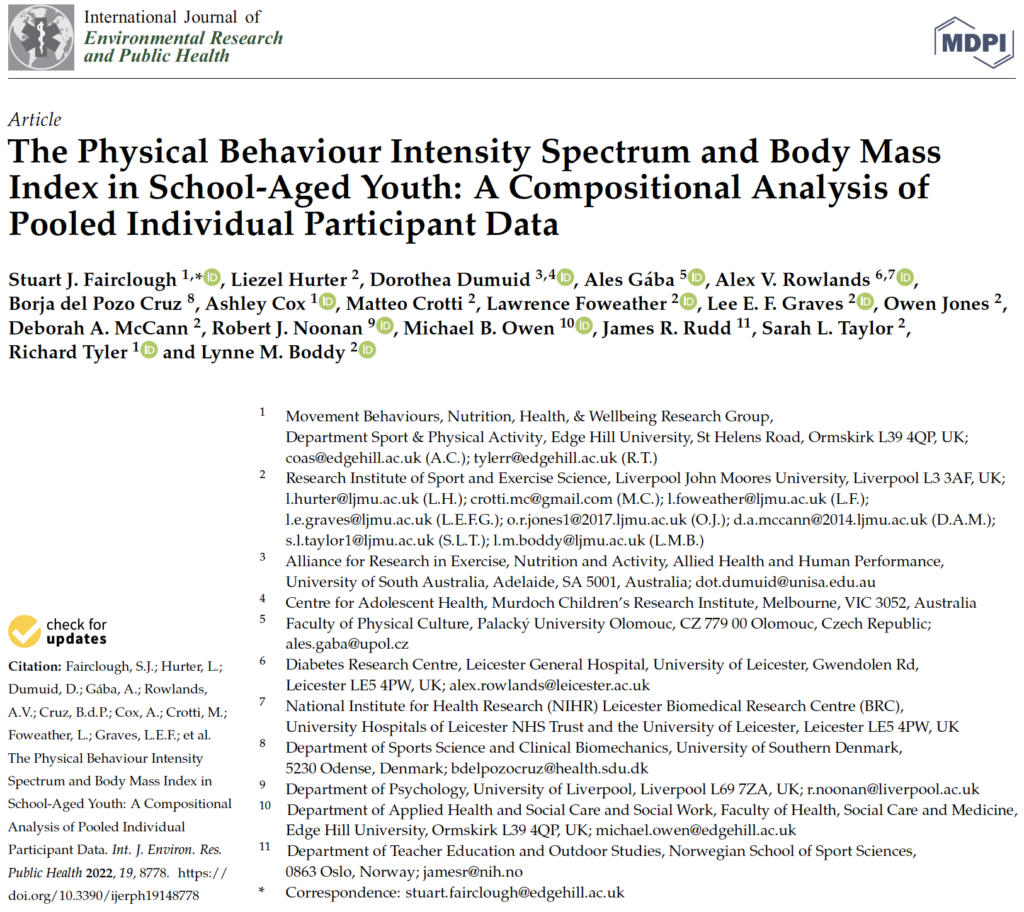 This study originated from an idea and discussion I had with colleague and collaborator Prof Lynne Boddy. Between us we have supervised a number of projects involving school-aged children and adolescents spanning almost the full age range of compulsory schooling in the UK (i.e., 5-16 years). The idea was to pool the raw accelerometer data from each study and harmonise them with accompanying non-accelerometer data. This resulted in a pooled individual participant dataset from the West Lancashire, Merseyside, and Greater Manchester regions of northwest England. For various reasons progress has been slow getting the data prepared and subsequently analysed. This paper, published in July 2022 is the first from our pooled dataset, with more planned analysis and subsequent papers in the pipeline. Below is the abstract, which is followed by a summary of the main aspects and results from the study. 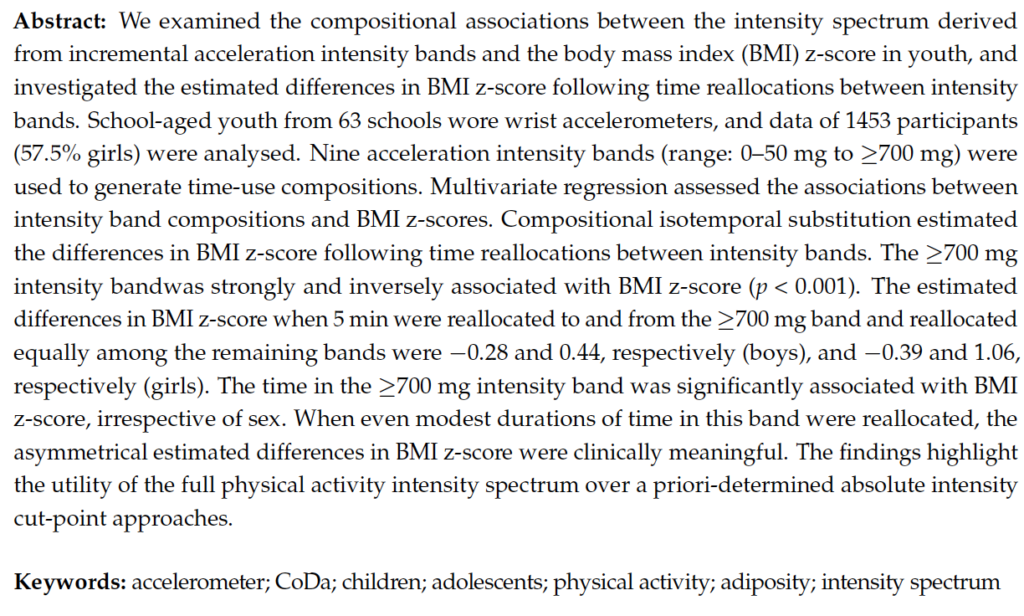 In this study we harmonised pooled accelerometer,  demographic, and health data from 5-16 years olds who took part in Edge Hill University and Liverpool John Moores University studies. We looked at associations between BMI z-scores (BMIz) and physical activity intensity assessed by wrist-worn accelerometers. One of the novel aspects of this study is that we combined raw acceleration data collected from different accelerometer brands/models (ActiGraph GT9X, GENEActiv Original, and Axivity AX3).

Instead of using published absolute intensity cutpoints we used 9 incremental acceleration bands to represent the full PA intensity spectrum during waking hours. An intensity spectrum approach was described and advocated for in the GRANADA consensus on analytical approaches to assess associations with accelerometer-determined physical behaviours in epidemiological studies. For this compositional analysis we used nine-part time-use compositions expressed as nine specific sets of eight isometric log-ratios (ILRs), which were used in multivariate linear regression models. BMIz was the dependent variable, and the intensity band composition ILRs were the explanatory variables. Where an intensity band (relative to the remaining bands) was significantly associated with BMIz (p < 0.05), this intensity band was then the focus of ‘one-for-remaining’ compositional isotemporal substitution analyses.

Data from 1453 participants were analysed. We found that 75% of waking hours were spent in the ‘inactive’ acceleration band of 0–50 mg, and generally fewer minutes were spent in the higher intensity bands. The exceptions to this were the 350–700 mg and ≥700 mg bands, which were the sum of the combined 50 mg bands (see Table 2 below).

Reallocating time from the ≥700 mg intensity band was reflected by unfavourable estimated differences in BMIz that were greater than when the time was reallocated to this intensity band.

As little as 5 minutes (boys) and 3 minutes (girls) of additional time spent in the ≥700 mg intensity band relative to the remaining bands were associated with meaningful predicted decreases in BMIz of 0.26 and 0.28 units, respectively. This this can be seen in Figure 1a and 1d, respectively below. 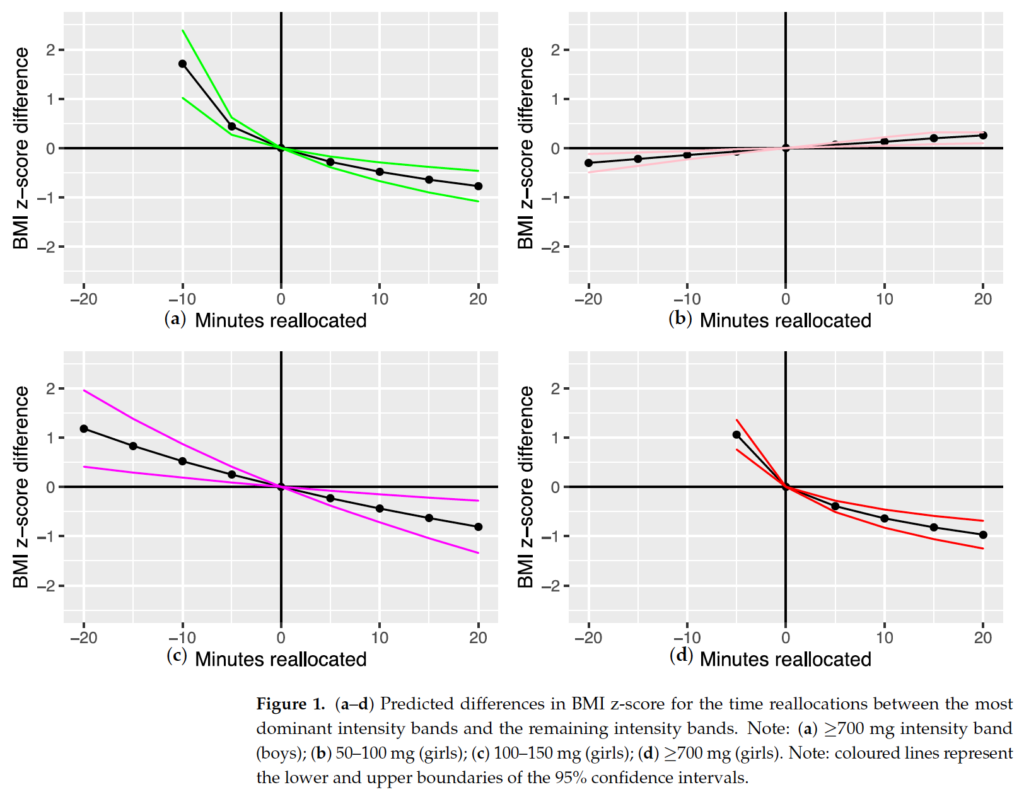 A big thank you to Dr Liezel Hurter for the initial hard slog pulling the accelerometer together and to everyone who contributed data and expertise to this project!

We have since added more studies to the dataset and have re-processed all of the accelerometer files to produce a much wider range of acceleration metrics for interrogation. Watch this space for more on this work.

“It’s Just Not Something We Do at School”. Adolescent Boys’ Understanding, Perceptions, and Experiences of Muscular Fitness Activity 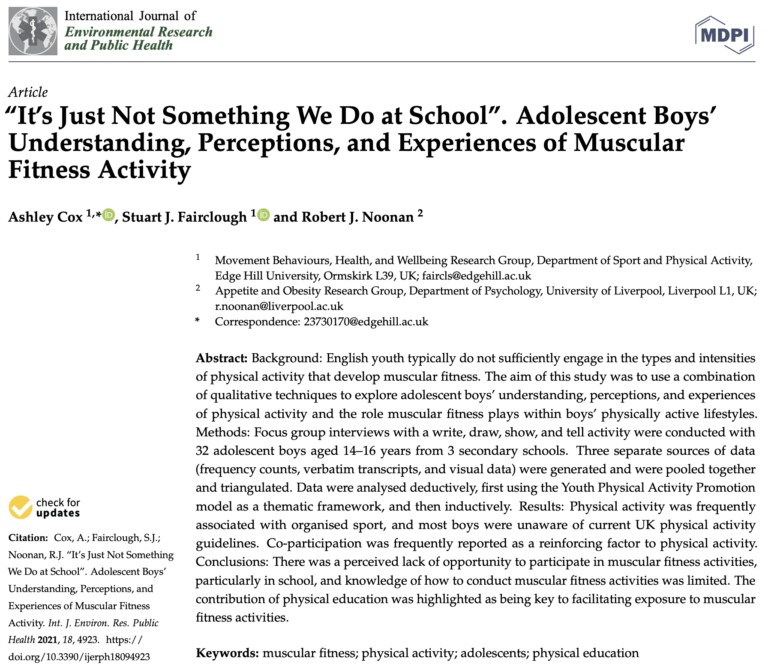 This qualitative study is the latest from PhD student Ash Cox. Ash’s research focuses on the promotion and perceptions of muscular fitness activities in schools. This study was published in 2021 in the open access International Journal of Environmental Research and Public Health. It involved a group of adolescent boys who took part in focus groups. The Youth Physical Activity Promotion Model was used as the thematic framework that underpinned the data analysis. The take-home findings were that adolescent boys perceived there to be limited opportunities to take part in muscular fitness activities, particularly at school, and that they had limited knowledge and understanding of muscular fitness activities and their role in health promotion. 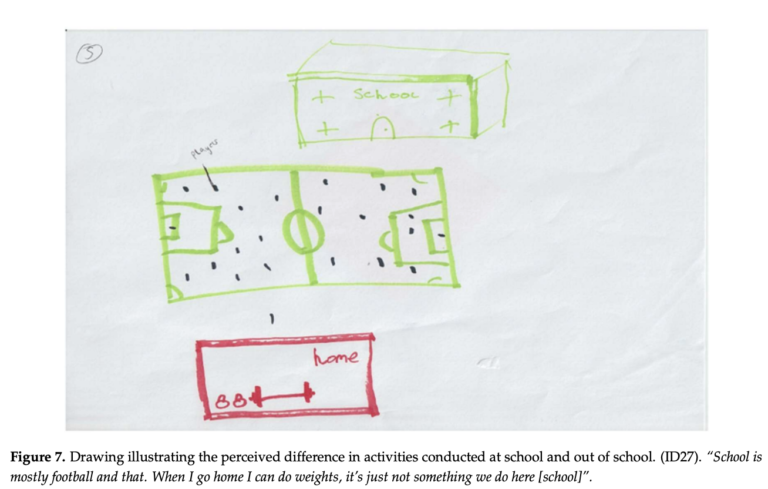 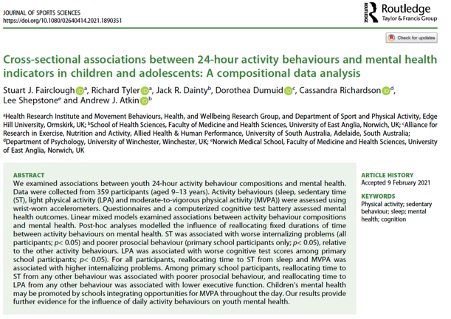 This study was funded by The Waterloo Foundation and supported by West Lancashire Sport Partnership and schools in Tarleton and Ormskirk.

We aimed to (i) look at the associations  between 24-hour activity compositions (i.e., sleep, light physical activity (LPA), moderate-to-vigorous physical activity (MVPA) and sedentary time (ST)) and mental health and cognitive function in children and adolescents; and  (ii) investigate predicted differences in mental health and cognitive function when time was reallocated between the activity behaviours.

Primary school students spent longer sleeping and less time being sedentary than secondary school peers. Less than 25% of the students averaged at least 60 minutes MVPA/day and almost 75% had less than 9 hours sleep/night. Emotional and behavioural mental health scores were in the ‘close to average’ range, there was no presence of depressive symptoms, and self-esteem was in the ‘normal’ range. The secondary school students performed better on each of the cognitive tests of executive function than their younger peers.

The 24-hour activity compositions were significantly associated with internalising problems (all schools), prosocial behaviour, and the switching and inhibition aspects of executive function among primary school students. The compositional isotemporal substitution analyses showed that for all students, time reallocations to ST from either sleep or MVPA were associated with more internalising problems (Figure 1).

Study limitations include the cross-sectional design, imbalanced sample of primary and secondary school students who were relatively homogenous in respect of area-level socioeconomic status, risk of social desirability bias in the mental health questionnaire responses, and risk of physical activity intensity misclassification due to use of acceleration cutpoints.

Relative to other activity behaviours, ST and LPA had the greatest influence on some mental health and cognitive function outcomes, particularly among primary school students. When time was incrementally reallocated between the activity behaviours, the largest predicted changes in the outcomes occurred when MVPA was replaced by ST or LPA. The results provide further support for schools to promote students’ mental health and cognitive function by enhancing and further integrating opportunities for MVPA throughout the school day, particularly during periods such as classroom lessons that students would traditionally spend being seated and/or moving in very low intensity activity.

This paper reports the process and outcome of a unique project to develop a whole-school physical activity framework. The project was superbly led by Dr Andy Daly-Smith and his team at Leeds Beckett University and involved a two-day stakeholder event that resulted in the development of the Creating Active Schools (CAS) Framework. The paper describes the unique development process and the resultant CAS Framework.

This systematic review and meta-analysis is the first PhD study of Ashley Cox. Ashley’s project is focused on developing muscular fitness outcomes in adolescent boys through the physical education curriculum. The analysis was based on data from 11 studies and concluded that school-based muscular fitness interventions in boys had small to medium effects. 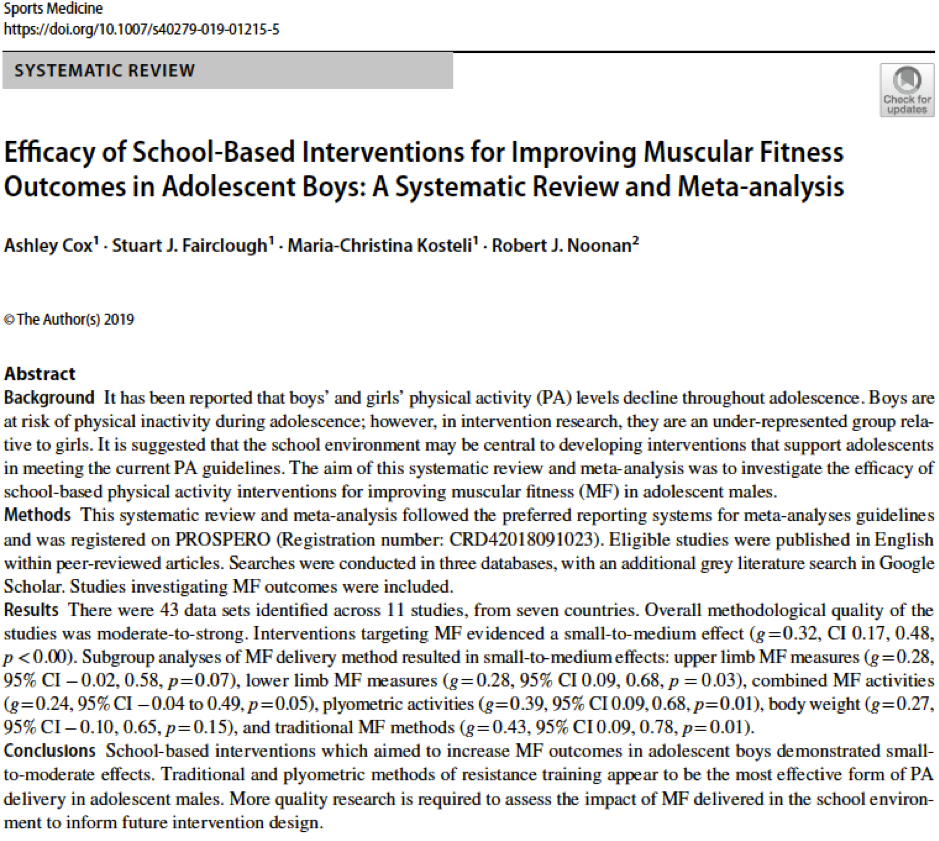 This study applied the Mx metric to look at its utility as an accelerometer outcome that does not rely on cutpoints but which relates to health outcomes in children. We used the school day as the context and focused on the M30 metric (i.e., the minimum acceleration for the most active accumulated 30 minutes of the school day). The Mx metrics were first introduced in an earlier paper led by Alex Rowlands and have subsequently been developed to demonstrate their use as translational metrics with data visualisations. 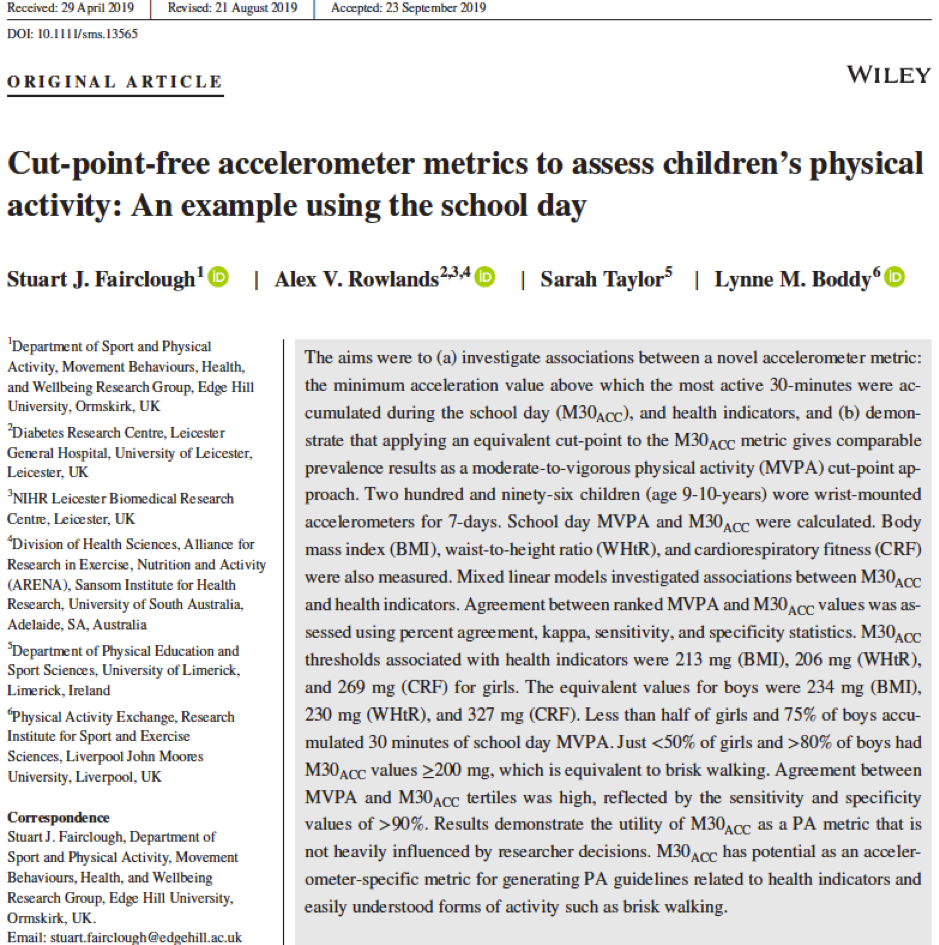 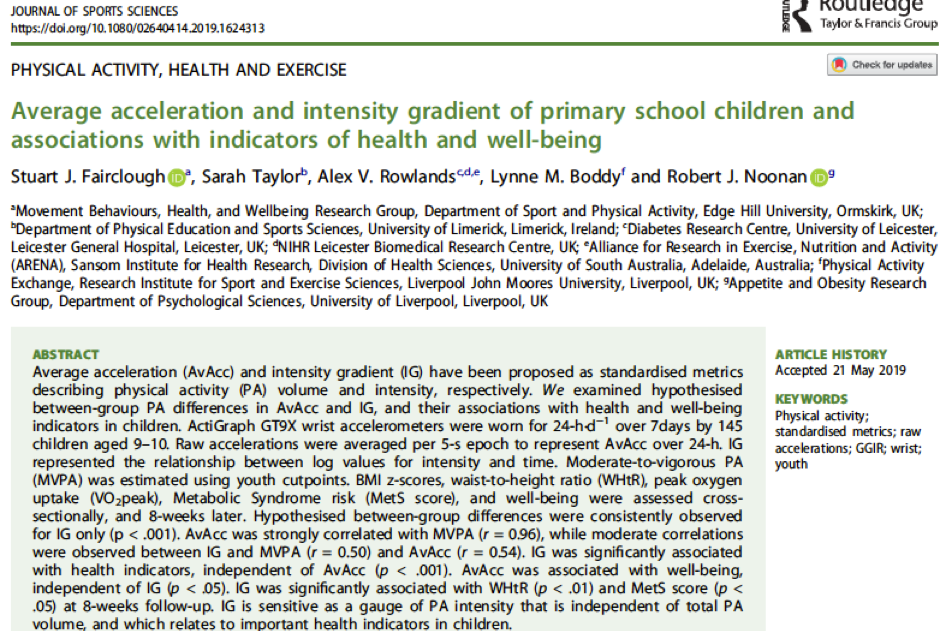 This paper describes the calibration of Youth Activity Profile (YAP) MVPA and sedentary behaviour algorithms for English primary and secondary school students, as well as their subsequent cross-validation with an independent sample. We found that predicted estimates of MVPA and SB from the algorithms were very promising but equivalency analyses concluded that agreement with device-based estimates needed improvement. The paper is open access and can be accessed by clicking the title above. 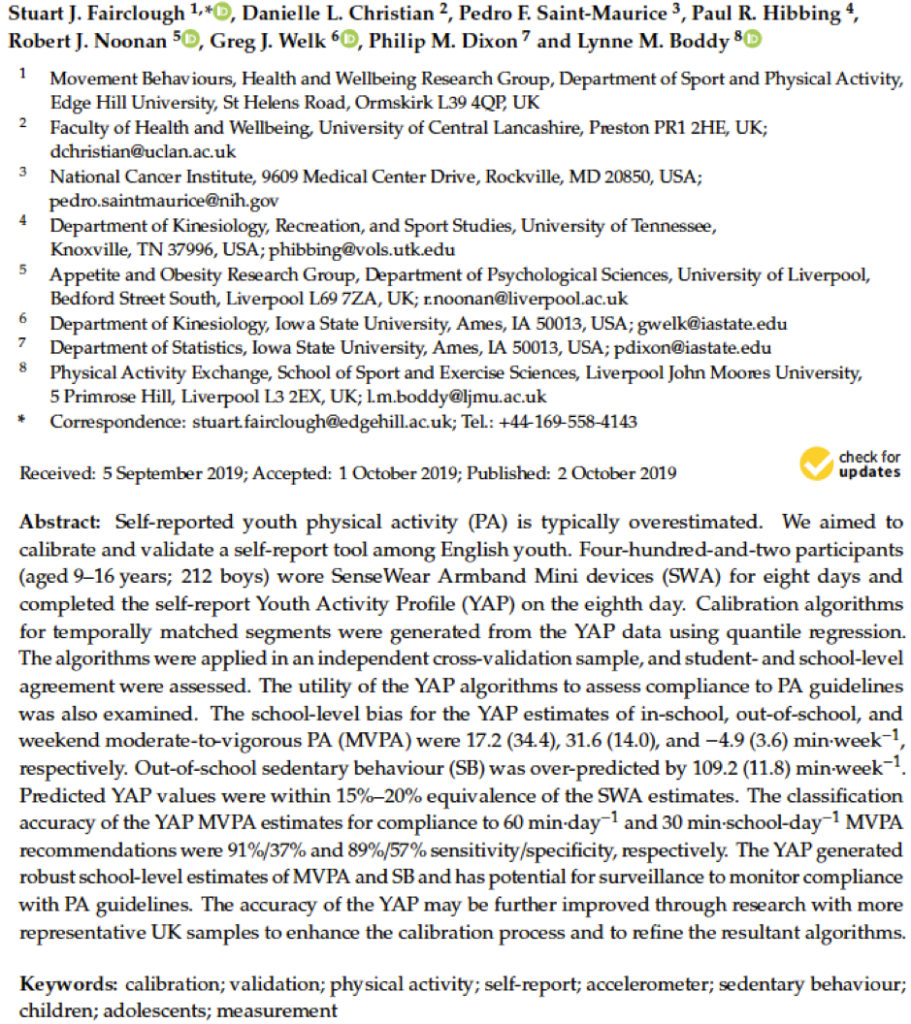 This paper is part of Liezel Hurter’s excellent PhD project which is expertly supervised by LJMU Physical Activity Exchange colleagues. The paper provides long overdue GENEActiv and ActiGraph raw accelerometer ENMO thresholds for sedentary (and stationary) behaviour for primary school children. The thresholds are included here but read the paper for the full details (it’s open access  – click the title above to read on). 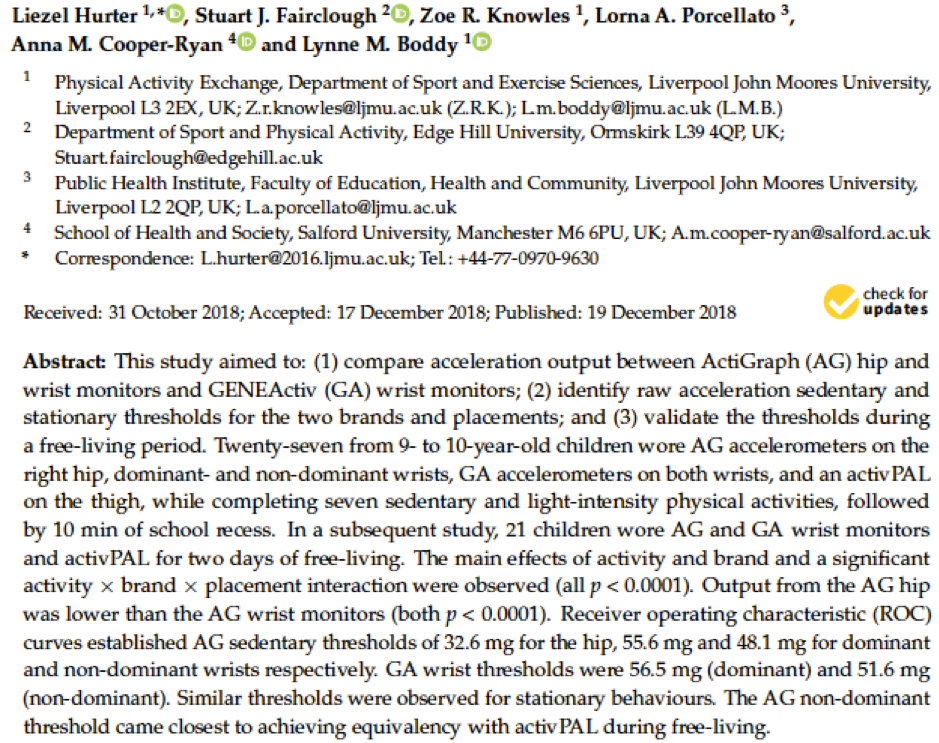 Validating the Sedentary Sphere method in children: Does wrist or accelerometer brand matter?

In 2014 Alex Rowlands (University of Leicester) and colleagues introduced the Sedentary Sphere for classifying time in sedentary behaviour in adults using the orientation of the GENEActiv accelerometer on the wrist. This 2019 paper from Liezel validates the Sedentary Sphere method in children wearing GENEActiv and ActiGraph accelerometers on the wrist. Click the title above to go to the article on the Journal of Sports Sciences site (paywalled). 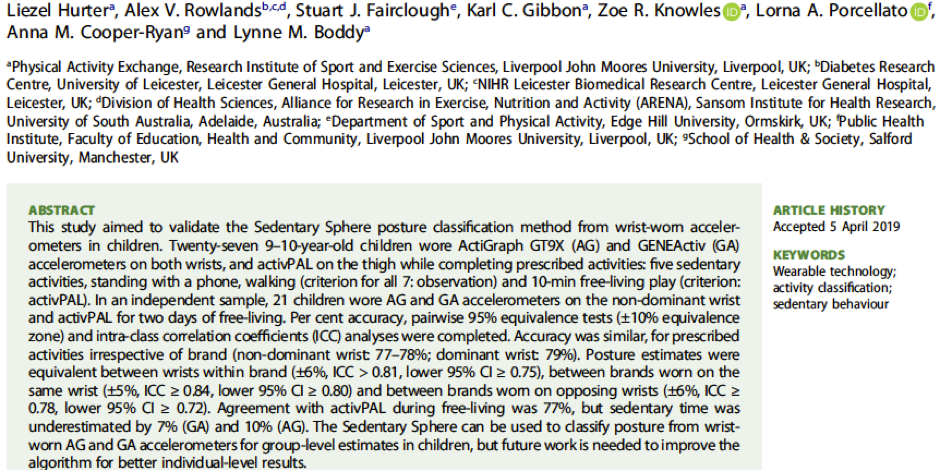 This paper is a collaborative effort between Edge Hill, LJMU, and Iowa State University as part of the Youth Activity Profile project. The project focuses primary on calibration and validation of the Youth Activity Profile self-report instrument, but in this article we focused specifically on sedentary behaviours and their associations with field-based measures of adiposity in youth. We report age and sex-related differences in prevalence of different types of sedentary screen behaviours, and their associations with adiposity. Click the title above to go to the article site (paywalled). 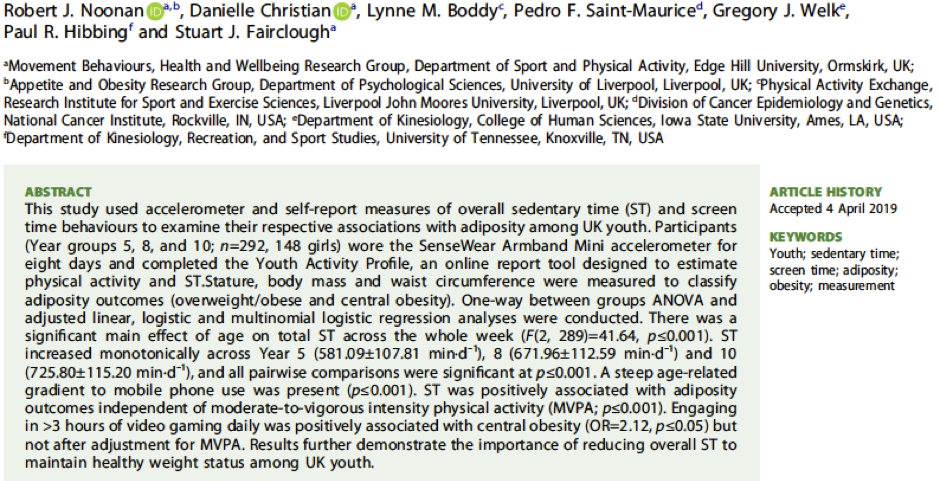 This article is part of former Edge Hill PhD student, George Sanders’ project which focused on physical activity and sedentary behaviour in older adults. This is the first study to generate GENEActiv (wrist) and ActiGraph (hip) raw acceleration ENMO thresholds for sedentary time and MVPA in adults aged 65 years +. The cutpoints are detailed in the figure below the abstract. To go to the article web page, click the title above (paywalled). 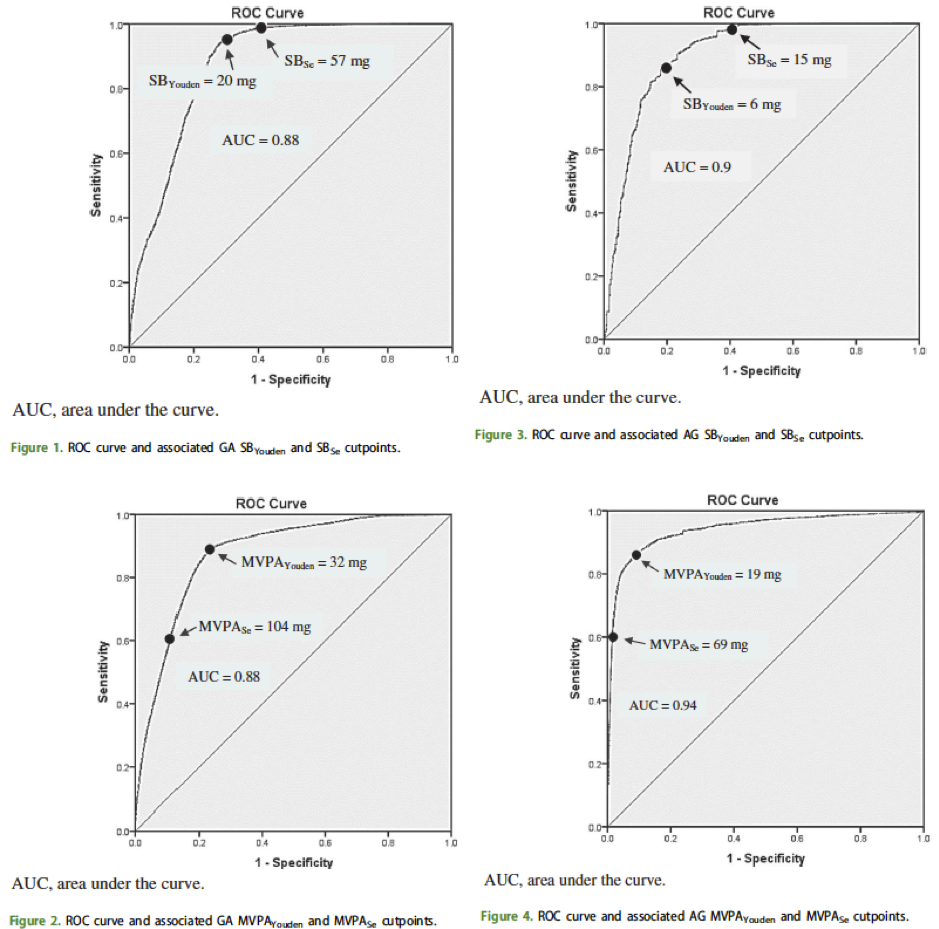 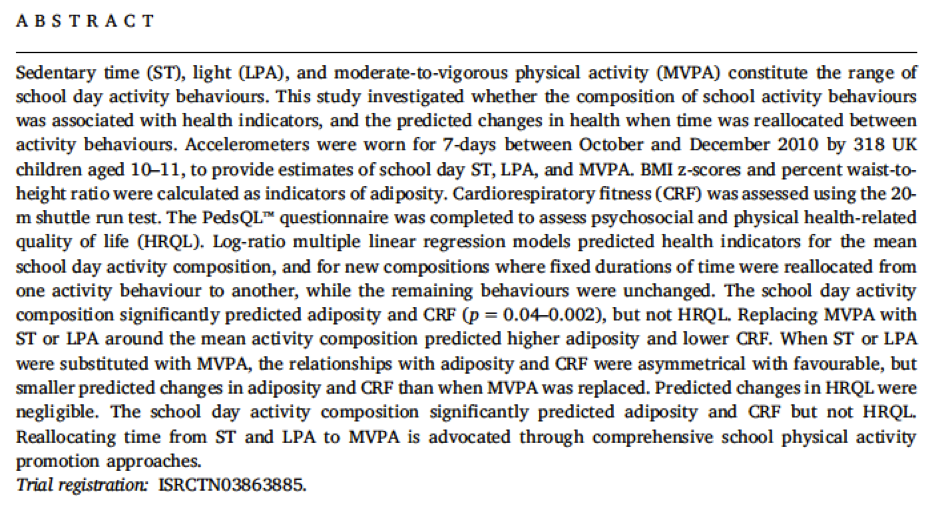 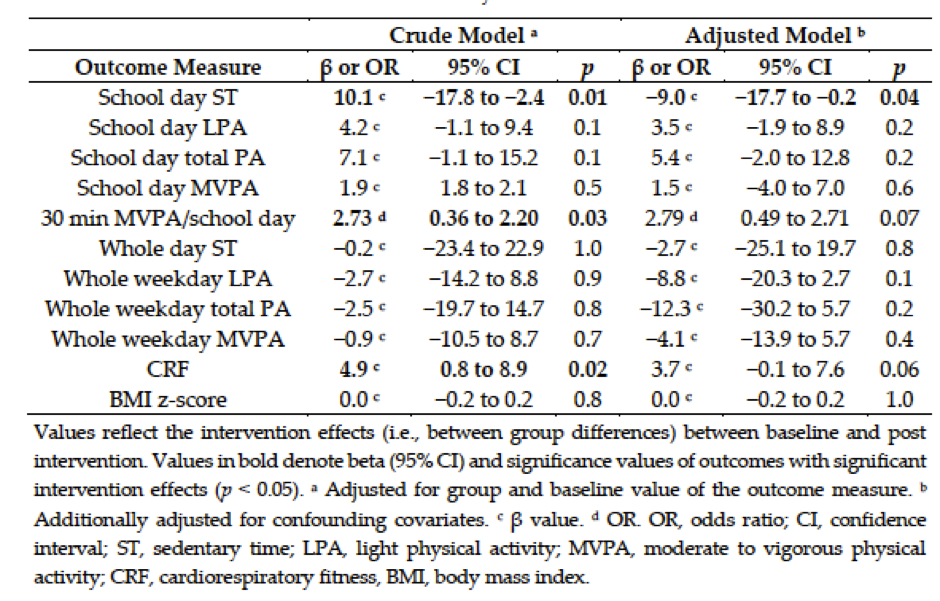 After adjustment for covariates and baseline values of the outcomes, the AS:Sk pilot intervention showed significant effects on sedentary time during the school day. There were no effects on physical activity, fitness, and body size.

Add“It’s Just Not Something We Do at School”. Adolescent Boys’ Understanding, Perceptions, and Experiences of Muscular Fitness Activity

“It’s Just Not Something We Do at School”. Adolescent Boys’ Understanding, Perceptions, and Experiences of Muscular Fitness Activity